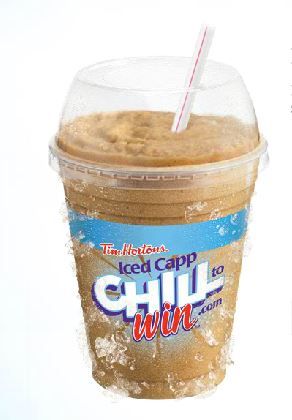 Tim Horton’s created Roll Up The Rim To Win to honour their most loyal coffee lovers, which is an annual contest Canadians look forward to every season.  This summer, Canada’s favourite coffee chain launched a new contest for Iced Capp lovers, called ‘Chill To Win.’

The contest officially launched on May 6, and celebrates the love for ice cold drinks on hot summer days.  Dave McKay, Vice President of Tim Horton’s Beverages, describes the national love for Roll Up The Rim as a feeling the company wanted to emulate in the summer.

“Nine out of ten frozen coffee drinks sold in Canada are served at Tim Hortons.  Canadians are choosing Iced Capp over any other option in the marketplace, so we wanted to do something to celebrate summer and reward our loyal guests.”

The Chill To Win contest applies to any sized Iced Capp in Tim Horton’s stores across Canada.  Iced Capp drinkers can peel the label on the side of their cups, and uncover a PIN code on the back of the label.  Players then visit www.chilltowin.com to enter the PIN code to play an online scratchcard game, which is similar in concept to scratch games inside online casinos.

Tim Horton’s allows players to scratch three boxes to uncover characters.  If the three characters match, players can win daily or weekly prizes, as well as automatically enter into the Grand Prize.  The smaller prizes include $25 Tim cards, Coleman beach sets, and $1,000 cheques, as well as the main prize of $10,000 prepaid MasterCards redeemable at various retail locations.  But fans are most excited to potentially win two tickets to Bon Jovi’s July 24 concert in East Rutherford, New Jersey.