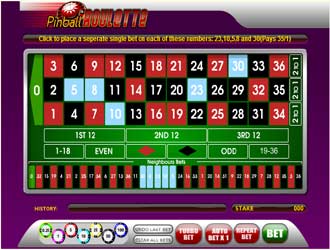 Pinball Roulette is a special form of this popular casino game that entails the use of a special type of interface. Specifically, it does not necessarily work with a standard wheel. Rather, it works with a special organization where you can possibly win by getting a ball to go down a pinball-like screen that will pay out more if you make the right bet on the game.

The game has a good organization that offers more ways for players to win large totals of money. The game’s setup features numerous great numbers in a special arrangement but it’s important to watch for how random the game is before trying it out even if the payouts are the same as what can occur in a standard roulette game.

Pinball Roulette works with a pinball-like screen instead of a standard wheel. In this game, you will place a series of bets on a standard table where you can bet on things like the individual numbers you want to go after, any groupings of numbers and so forth.

After you make your bets, you can then get the game to start playing. Specifically, you will have to get a ball to come out from the bottom like what happens on a pinball machine. The ball will move down through a series of bumpers and some pegs all around the middle of the screen. This will cause the ball to move down and eventually result in it moving into a slot that features a number. The game will then pay out to you based on the type of bet that you made provided that the bet meets the number that the ball landed in.

The game’s payouts are identical to what comes about in a standard roulette game. It still works with the same general features where a straight-up bet will pay out the most. However, the way how the number will come up will be different.

You have to watch for how the numbers on the roulette screen are organized. The green 0 is typically featured at some point in the middle of the screen although that can vary. One point though is that the numbers are positioned next to each other just like what you would find on a regular roulette wheel.

Also, like with any other roulette game, the number that will come up is still random. Think of the pinball feature as an exciting part of the game but make sure you think carefully about how the game will have different pegs and features that make it so the number that comes up is as random as possible.

The Pinball Roulette game can be found at the Vegas Paradise and Jackpot Paradise casinos. These are both popular places for casino games that offer some entertaining features including many different types of roulette variants. The casinos also offer up to $200 in free money to use on a first deposit. This can be used on many of the different roulette games around each of these casinos.