Set The Reels On Fire With The Fire Joker Slot 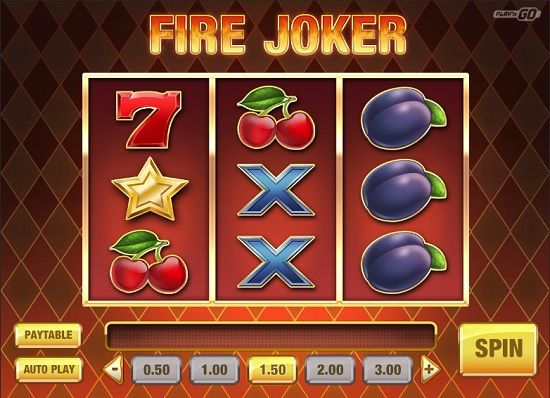 Fire Joker slot is brought to us by Play’n Go. This three-reel slot with five fixed paylines is designed to look like the traditional fruit machines, but does come with a twist, since, unlike old-school slots, it offers a couple of interesting additional features that may result in lucrative payouts and stacked Fire Joker Wilds that appear on all reels and substitute all other symbols.

Concerning the graphics department, the developers decided to keep it simple, but did add a blistering element, since the reels are set above the burning fire that surrounds the reels every time the winning combination occurs. The 2016 release also houses some pretty neat soundtrack that adds to the excitement during gameplay.

Fire Joker Wild is the most important symbol in this slot, because it substitutes for all other symbols and is the highest paying one in the 2016 release. We love the fact that it appears on the reels quite often and also the fact that it can appear in stacks on any of the three reels, giving gamers much more possibilities for landing winning combinations.

We are glad that Play’n Go decided to include a couple of special features in this traditional slot which really add to the excitement. Respin of Fire is a neat feature, since it gives gamers a second chance for landing some winning combinations provided that they first manage to land two reels with identical symbols. With a bit of luck and some Fire Joker Wild stacks, you might end up winning some decent payouts or even triggering the Wheel of Multipliers.

Wheel of Multipliers feature is also quite tempting, due to its maximum possible payout of x800 times the initial stake. Just imagine that you place the bet of $100 and win the maximum payout, winnings will go through the roof! But, if you do not get the maximum payout, do not worry, because most of the winnings in this feature will satisfy your needs.

We do understand that the developers wanted to keep it simple concerning the graphics, but our impression is that they kept it bit too simple, even though we do like how the reels are caught on fire when a winning combination occurs.

We are not particularly fond of traditional video slots, since they narrow the chances for landing winning combinations with mere three reels and five fixed paylines, so gamers may end up waiting for a winning combination a bit longer than they expect.

Also, traditional slots do not offer much additional features, making playtime quite dull after a longer period of time. Play’n Go did include a couple of special features to make things more interesting, but, bearing in mind that respins and Wheel of Multipliers are not that easy to trigger on regular basis, you might get bored after a while.

As we already said, we are rarely impressed by classic video slots, since we are more into action-packed modern games. Even so, this is not a simple fruit machine, since it offers a couple of special features that might be quite rewarding, bearing in mind the possible maximum payout.

However, after a period of time gameplay might get a bit monotonous, especially if you go a while without managing to trigger the abovementioned additional features.

Betting range is quite wide, affordable both for high rollers and those with thinner wallets, while the graphics are quite simple, yet interesting in some aspects.