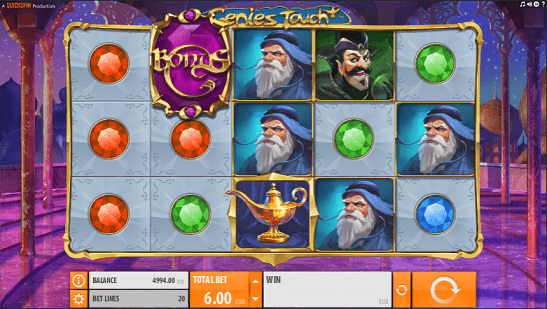 Based on a Middle Eastern story, that pretty much everyone knows thanks to Disney, Genies Touch takes the popular blue character that served as the genie from the lamp, and turns it into a beautiful woman that does pretty much the same thing.

In the original story, the genie granted three wishes, thankful that it was released from the magic lamp. There is no feature like that here, but the game offers its own good reasons to try it out. 5 reels and 20 paylines are part of the game, offering payouts that go up to $1,250. This is a Quickspin slot machine.

The design is gorgeous, the characters appearing on its reels looking better than what Disney can usually give us in its movies. They’re almost painting like, but excellently done. The only downside I see here is the fact that you have images with gemstones among the symbols, which are a bit too simple compared with the fun characters from the reels. The background image, with its look at the city from Middle East, is just as gorgeous as the main symbols.

A couple of different features exist here, but I think the focus should be on the wild for now, the symbol which is used in so many other games that those that don’t have it feel incomplete. In this case, the wild is both a way for you to get the top jackpot of $1,250, and a substitute for regular symbols (not for bonus scatter icons though).

Another symbol that seems important is the Magic Lamp, which triggers a Genies Touch bonus when it shows up in 3+ locations at the same time. The feature turns adjacent symbols from next to the Magic Lamps into a single randomly chosen symbol. The Magic Lamps turn into that symbol as well, and this way you get a large number of identical icons on the reels, hopefully increasing the odds of getting a payout.

The third and final feature symbol is the one marked Bonus. It’s a scatter, which is needed to appear three times in the same spin in order to start a round of 10 free spins. You get even more Magic Lamps during the free spins, which means better chances of triggering Genies Touch.

While the presence of the gemstones among the symbols of the game is not a plus for it, they at least look well made, and they don’t hurt the slot’s design as poker cards would’ve.

I’m not too excited about the payouts offered in the game, which I think should’ve been bigger than 250x since the slot gets only 20 bet lines.

Genies Touch is a game that you enjoy immediately, thanks mostly to the quality of its graphics. The features are not overly special, and the payouts are on the low side, so there are downsides as well to this slot.

What To Know About Online Casinos
Single Game Sportsbetting A Possibility in Vancouver
How Online Sports Betting Is For Both The Customers And The Operators
Borgata Casino Issued $25,000 Fine For Flying In Canadian Gamblers