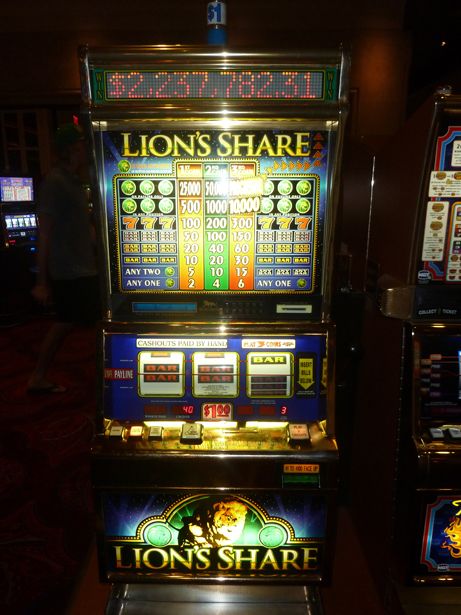 A cult of loyal slots players are following along with the most infamous machine inside the MGM Grand Hotel and Casino in Las Vegas.  The Lion’s Share slot machine is the oldest machine on the casino floor, and has accrued a jackpot prize worth just under $2.3 million.

The Lion’s Share is the only remaining $1 progressive slot machine from the early 1990s inside the MGM casino, unique among newer models in possessing the traditional levers gamers pulled to make their bets.  The casino wants to get rid of the machine and install a newer model, and is including the machine with the jackpot prize to the eventual winner.

Nevada law requires all slot machines to pay out 75 percent of the money they take in.  As a result, the Lion’s Share will not leave the casino floor until someone eventually spins up the winning three reel combination to claim the grand prize.

With the casino desperate to get rid of the machine, the Lion’s Share has undoubtedly become MGM’s most popular game on the casino floor.  Players around the US, touring from Canada or elsewhere are drawn to the Lion’s Share in the hope of finally winning the jackpot – as well as the unique opportunity to own a casino slot machine.

“This game probably gets played about five times more than the average game on our casino floor.”

The game is so popular that MGM setup social media pages devoted to tracking the progress of the Lion’s Share slot.  Subscribers are emailed any alerts or updates that inform of additions to the main jackpot, and perhaps one day inform of an eventual winner of the game.