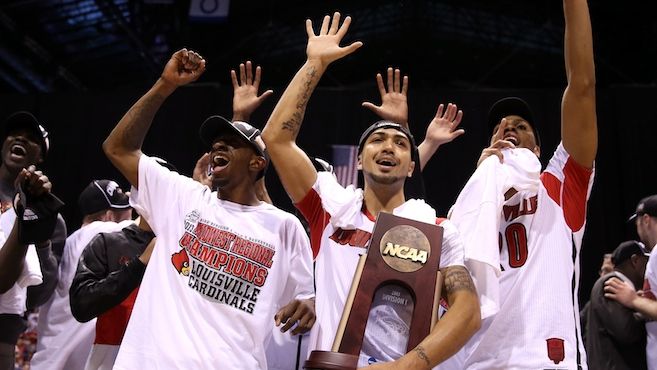 The March Madness grand finale was an exciting night where the best in the league tipped off to crown the champions of the NCAA.  The tournament was rife with upsets, which either made or cost sports bettors who gambled on the outcome of the tournament.  In the end, neither the odds or what the media predicted mattered – the Louisville Cardinals were crowned the champions because they were the team that had the heart to win.

Louisville had a tough road to the finals, particularly following the injury of guard Kevin Ware.  The young guard broke his leg bone in half after attempting to block a shot in a game against Duke University.  The injury went viral, and the entire NCAA expressed their regret that one of their upcoming players suffered such a traumatic setback.  However, instead of letting the shock overwhelm the team, Louisville coach Rick Pitino used Ware’s injury as motivation for the team to come back stronger than ever.

During their semi-final showdown against Wichita State, the team had a difficult first half and entered the second half down by a dozen points.  But within minutes of stepping back onto the court, Louisville once again looked like the team that pundits and gambling enthusiasts recognized could win the tournament.  Luke Hancock led the team with 20 points to rally back a 72-68 victory over Wichita, and advance to the finals.

During the championship game against the Michigan Wolverines, Hancock once again led the team in points, and the team held Michigan off in the closing seconds of the game to win 82-76.  Kevin Ware was on the sidelines as his brothers on the court wore his Number 5 on the backs of their warm-up jerseys, while emblazoned on the front a message to ‘Ri5e To The Occasion.’ The team was determined to win the game for Ware, who spoke to the media following the game about the love he has for his teammates.

March Madness 2013 will forever be remembered as a year of upsets, and an injury like no other in the history of basketball.  But in the end, the team with the most heart was crowned as the champions.