James Win is a five-reel slot with 30 fixed paylines, developed by Bluberi and powered by Microgaming Quickfire software.

The main theme of the slot is the famous MI6 agent, 007, the biggest womaniser among secret agents. In order to fill the shoes of his famous predecessor, secret agent 777 also enjoys luxurious cars, posh watches, martinis, gamble and beautiful women.

Set in sunny London, the reels are overlooking the House of Parliament ant the Tower Bridge. The good people of Bluberi did a fine job concerning the graphics and the animation, while the sound effects are very similar with those from James Bond movies.

The full-reel Wild symbol with the Phone Box and the Lady Spy giving up to 6 additional Wilds and x2 multipliers is an awesome feature.

Six additional Wilds create an outstanding number of winning combinations. Given the fact that each multiplier applies to the win, it opens the possibility of multiplying your winnings by up to 16 times, resulting with a respectable amount of money on your balance.

London Chase Bonus is packed with action and this is the place where you become a proper secret agent, with four missions in this board game, all of them giving you a chance to enter the Secret Room and pick one of four suitcases with guaranteed prizes, but you can win plenty even if you do not find any of the hidden envelopes.

Free Spin feature is also quite nice, since it brings 7 free spins when you land three Binoculars Scatters on reels 2, 3 and 4. Graphics have that spy movies feel to them and are done pretty good, as well as the soundtrack during the additional features. 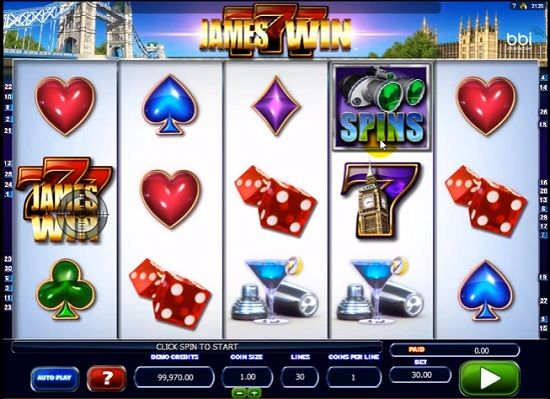 You will rarely land the 777 James Win Logo in a winning combination. We went as far as three of a kind, which makes us think that a pure five-of-a-kind combination is virtually impossible to get.

The Free Spin feature could have brought more than just 7 free spins, but the developers probably used the number 7 in order to follow the theme of the slot.

The London Chase Bonus round, although very interesting, comes as seldom as possible, and unlocking all four suitcases in the Secret Room  is quite hard to achieve. When you do manage it, you will never hit the case with the biggest prize, or maybe that was just the case with us.

If you are a fan of James Bond movies, you will certainly like this slot. The possible payout of $30,000 will probably attract a significant number of players, but bear in mind it is not easy to hit the jackpot.

A solid amount of special features will keep you in the game for a long period of time, but the fact of the matter is you will not trigger any of them as often as you would like.

James Win can be disappointing at one point and very rewarding at other, but it is certainly worth playing, at least for a while.