Incinerator is a creation of the guys from Yggdrasil Gaming, a developer that started working on its gorgeous slot machines in 2013, making it one of the newer companies to enter this market. The game has the usual 5 reels, with a fixed number of lines on them, 20 being used.

The inspiration for it isn’t too obvious, but it seems to have a certain modern vibe with influences from the technology of the future, the images used for the symbols being good enough to be parts from some kind of space ship. The features which you will get to enjoy inside rely mostly on wilds, along with something called Wild Pattern.

One of the things I feel strongly about when it comes to Incinerator is the quality of its design. Though the designers didn’t have a precise theme to work with, they managed to create a game that is fun to play nonetheless. You might not know what those symbols are supposed to mean, but there is no doubt that they are well done.

The features are also at the top of my list. The game relies heavily on wild symbols, which appear either on their own or with help from the Wild Pattern feature. The only time when you get to see what the title is about is when you have a winning combination. The symbols which are part of it will be consumed by fire, allowing others to come in and occupy those positions. This can keep happening for as long as you have winning combinations, plus for each three consecutive wins you also get the Wild Pattern to activate.

With the Wild Pattern, you get a number of wild symbols to appear on the reels, covering up existing symbols where needed, or occupying empty positions otherwise. The pattern in which the wilds appear is picked at random, out of 16 possibilities. 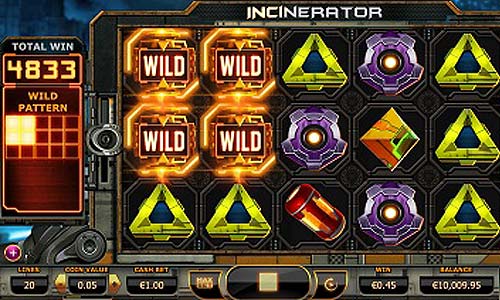 One thing that you might not be a fan of is the value of the prizes that the game offers, though it makes up for that part with the chance to win often.

The lack of a precise theme also bothers me, as I prefer to play games where I know what’s supposed to be happening on the screen. There is no story told here, no action that you can follow or imagine.

Given the rate at which you can win prizes in Incinerator, I’d recommend you give the game its chance. There might be some aspects about it that I’m not a fan of, but the pros outweigh the cons in this case.

The Emergence and Momentum of .Casino Domain Sales
The Stars Group Enters Into A Deal With CrownBet
Indiana State Governor Vetoes Proposed Online Betting for Horseracing
Niagara Falls Betting On Strong 2014 With Up To $20 Million From OLG