Lucky Australian Player Wins $94,000 In One Month At All Slots Casino 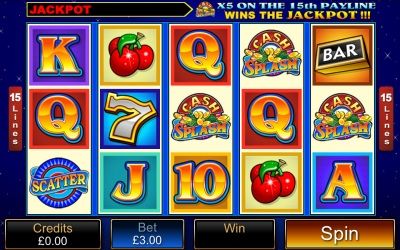 All Slots Casino seemingly loves players based in the land down under.  The online casino is popular in many developed nations around the world, including Canada, the UK, and other European jurisdictions.

But Australia is the nation where players see the luck of the reels spin up on their sides.  Online slots are among the most popular selections for regular players, and become even more attractive when there are significant payouts.

A player known as Craig P from Australia won two progressive jackpots on the 5 reel video slot Cash Splash.  The 5 reel version of the game offers players 15 potential paylines, with multiple scatter and wild symbols available to collect.  The jackpot is claimed when a player spins up 5 Cash Splash wild symbols on the final payline.

As with all progressive games, the jackpot prize on Cash Splash grows in size the more that players bet on the game.  But in order to be entitled to the jackpot, players must bet the maximum value when they spin the reels.

Cash Splash paid out over $57,000 AUD to Craig P on February 3 and another $37,000 one week later on February 10.  The most remarkable part of the story is that Craig has only been a registered All Slots accountholder for approximately one month.

David Brickman, Vice President of Player Affairs for All Slots, congratulated Craig P. when he received his first jackpot payout, and once again applauded the Australian player for sticking with one of his favourite online casino games.

“They say that lightning doesn’t strike twice in the same place, but the two big wins in a week by All Slots Casino VIP Craig P. suggest that sometimes it does!”