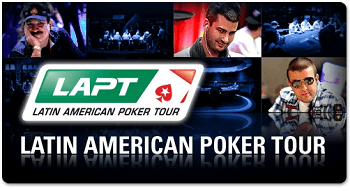 The Latin American Poker Tour (LAPT) is celebrating is ninth season and Poker Stars has published its official schedule. The poker tour will consist of stops in five major cities, which will not even be in Latin America. However, there will be a $2200 main event in the Bahamas that will be included the PCA (PokerStars Caribbean Adventure). There may be a lot of participants this year, due to the global popularity of the tour.

Just like in last season, four different Latin countries will be hosting an event of the tour: Brazil, Uruguay, Panama and Chile. The finale will again be hosted by Brazil, with a possible merging of LAPT with the Brazilian Series of Poker (BSOP) Millions for this one event. In each venue, there will be special games for gamers playing with lower stakes.

All five festivals have a $400 No Limit Hold’em Cup on their schedule.Many poker experts opine that this season’s venue should spark lots of interest. They are making predictions about how their favorite professional poker stars are going to perform. No one knows how this will affect numbers for the LAPT. Last season, LAPT became part of PCA and the buy-in was increased to $3000 each for the 736 participants. The winning jackpot of over $350K went to American poker star Josh Kay.There are some experts who believe that poker is seeing a huge revival in the Latin American region. One of these is PokerStars’ Director of Live Events, Edgar Stuchly. In his various statements to the press, Stuchly has insinuated that there may be some surprise visitors during this season’s tour.

Anthony “GrindHeaps” Aston of Australia, has become the 13th recipient of a million dollar “Spin & Go” jackpot from PokerStars. Aston won the cash after playing only 33 hands and getting a score of seven figures. He played against EnglishGirl 9 and Gavin O’Rourke, who both won $100 K for coming in second and third, respectively. O’Rourke is a past winner of the World Championships of Online Poker (WCOOP).

Previously, Aston appeared three times in the Australia & New Zealand Poker Tour (ANZPT) Main Events, which earned him at least $168K in live tournament cash. After giving Aston his $1 million in winnings, this will make the eighth of such prizes in two months. Twice, winners have come from Australia. There have been at least four winners who played with $100 buy-in and even a $5 buy-in.