Cowboys Casino “Counting The Days” Until Reopening Of Saddledome 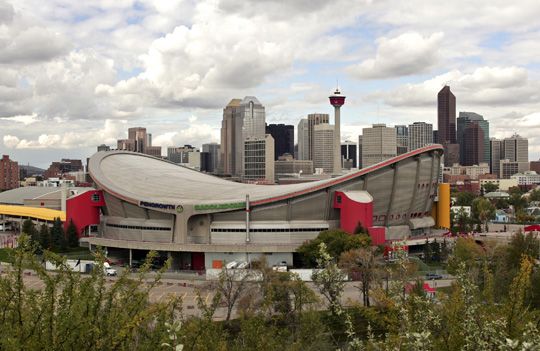 After nearly three months spent underwater, Calgary’s Saddledome is expected to reopen once again.  The grand re-opening is encouraging news for businesses in the neighbourhoods surrounding the arena, including the Cowboys Casino located a few blocks north of the Saddledome.

The Saddledome is one of Calgary’s signature buildings, which was drowned by unprecedented floodwater earlier this spring.  The rising water reached the eighth seating level within the arena, causing significant damage to the interior structure.  Officials who work in the building stated the repairs are expected to be completed by September 1.

The Saddledome is home to the NHL’s Calgary Flames, and preliminary damages hinted that the team might have required a temporary facility to host their home games this season.  But much to the relief of the team and the businesses in the area, the Saddledome was given the all-clear, and the Flames will faceoff as scheduled on their home ice in October.

The Cowboys Casino is one of the businesses thankful to see the Saddledome will reopen for the full Calgary Flames season.  The venue lost significant business due to the floods, which also limited the attraction of the casino to guests of the annual Calgary Stampede.  Activity at the casino’s slots, table games, and poker rooms was far less than operators are accustomed to seeing, making the NHL season all the more important.

Stephen Romeike owns the Melrose Bar inside Cowboys Casino, who admits the summer was tough due to the aftermath of the floods.  But he expects his bar will be packed to the rafters again once the Flames hit the restored Saddledome ice.

“Any night when there’s a game or an event at the Saddledome our crowd is 60 to 75 per cent from the dome.”

Melrose Bar and the rest of Cowboys Casino are expecting their first renewed inflow of players on September 11, when the Eagles host a tribute concert at the Saddledome in tribute to Calgary’s recovery from the floods.