Niagara Falls Votes For New Modernized Casinos In The Region 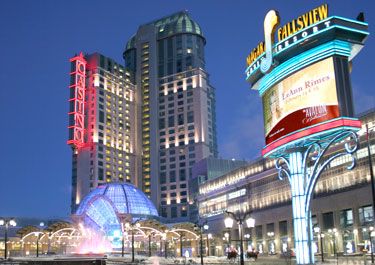 The Niagara Falls mayor convinced city councilors to unanimously support asking the Ontario government for new casinos or other gambling destinations in the region.  Councilors also supported issuing a Request for Proposal to include the current Fallsview Casino and Casino Niagara in the OLG’s modernization strategy.

In a statement following the council vote, Mayor Diodati stated that Niagara Falls must be included in the modernization strategy to remain competitive with other locations across the province, and across the border in the US.

“Our Council has always been supportive of the gaming in Niagara Falls, and our doors are always open to expanding and strengthening our casino industry.  It is the logical place in Ontario to expand the gaming sector and attract more tourism, jobs, investment and spending.”

Diodati intends to speak directly with Ontario Premier Kathleen Wynne and Finance Minister Charles Sousa regarding the Niagara Falls motion.  One of the items on the table will be developing a 7,000 seat theatre to diversify one or both of the casinos as entertainment destinations in addition to gambling facilities.

Wynne and Sousa have the authority to ensure the OLG takes motions from city councils into consideration.  The two provincial leaders are undergoing a similar review in Ottawa, where the local government is demanding a second casino in the region.

Scandalous Senate Pressured To Vote On Bill C-290
Ontario to Offer Regulated Online Gambling, Despite BCLC Debacle
Canadian PokerStars employee will likely be facing jail time
No New Rulings on Gambling Being Issued at the Moment