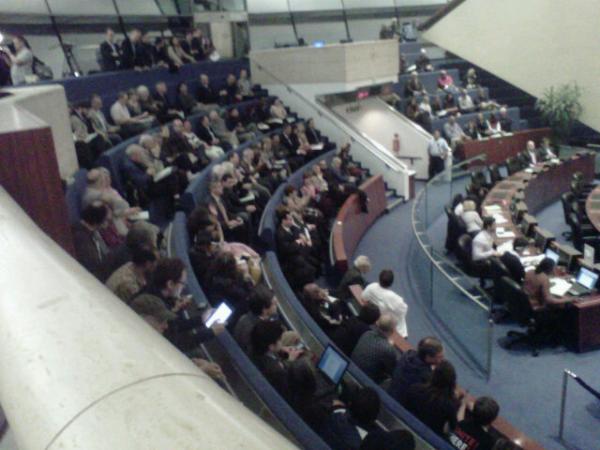 OLG’s plans for opening the doors for casino operators to invest in Ontario have received a widespread discussion in the media, in the public, and in the government both provincial and municipal.  Strong opinions both for and against the idea of casinos have raged across Ontario since the OLG announced its plans back in March of this year.  Last night Ontario’s two largest communities hosted rigorous debate on whether to move ahead with plans for casino development delivering support, dissent, and controversy in each of the meetings.

Last night in Toronto the public had the chance to express its opinions at a special town hall gathering of community council.  At the gathering over 300 locals were invited to attend and express their opinions either for or against the idea of a casino within the city borders, with reports on zoning for specific locations cited as development cites submitted to the council for review.  Naturally there was support on both sides of the debate; even the CAW got in on the action saying it is for the idea so long as jobs are provided to train Ontarian workers.
Not to be outdone Ottawa also completed a city council meeting established to give official consent for the OLG to negotiate with casino operators for development plans in Ottawa.  Councilors held a very intense debate discussing the decision previously made by the Finance and Economic Development committee to proceed with Mayor Jim Watson’s motion for negotiating with the OLG.  That decision required city council approval before being given official consent and in a 19-5 motion, council voted in favour of ratifying that decision.
In both meetings however, there was controversy over the OLG’s policies and how negotiations with operators may commence.  Councilors in both cities suggested there was a lack of transparency from the OLG about how it would go about making its recommendations to casino operators, and that the cities need that information to make a more informed decision.  There is also concern the number of jobs expected to be created may not be as accurate as the OLG and provincial government are suggesting.
Regardless of the controversy plans for casino establishment appear to be gaining momentum; Toronto and Ottawa are now the frontrunners in the process with Hamilton council now putting the question to its public for approval before moving forward.  No matter the location it appears the OLG’s plans for a new casino are becoming less a possibility and more a probability.