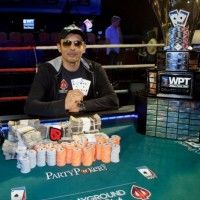 Canada crowned a new World Poker Tour champion this week at the Playground Poker Club in Montreal.  Amir Babakhani crushed the final table to win the Canadian Spring Championship leg of the tour, capturing the top prize of $442,248, along with a $25,000 stake in the WPT World Championship at the Bellagio Casino in Las Vegas later this month.

Babakhani began the final day of the tournament with a commanding chip lead, and never looked back the rest of the day.  He was responsible for the elimination of four of his five final competitors by incorporating an aggressive style of play.  Babakhani raised the pot on most hands, betting on the odds of the ‘turn’ and ‘river’ cards coming up in his favour – a bet that paid off time and again.

The final heads-up battle saw Babakhani face off against Barry Kruger, who was the most difficult opponent that Babakhani faced in the tournament.  Kruger won two hands that doubled up his chip stack, which provided him a competitive edge against the leading Babakhani, and put fans on the edge of their seats as the tournament suddenly became unpredictable.

As usual in a poker tournament, the final hand was the most exciting.  Babakhani bet $600,000 on a flop that contained the 5 of diamonds, 5 of clubs, and 3 of diamonds; Kruger eventually called the bet.  The turn card drew up the 2 of clubs, which Babakhani bet $1.3 million only to be re-raised by Kruger, who went all in with $3.3 million.

The call was made, and the river flipped up the Queen of clubs, which proved no help for Kruger.  Both players had a 5 in their hole cards, giving them each three of a kind.  But Kruger’s 4 of hearts was worth less than Babakhani’s 8 of spades, which proved the deciding factor.  Babakhani won the hand, and the Canadian WPT title with it.

Babakhani will next participate in the WPT championship event at the Bellagio, which begins on May 19.