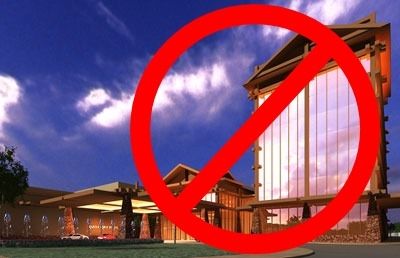 The people of South Surrey have convinced their mayor to speak on their behalf – and reject the proposed Gateway casino.  City council hosted an extended public consultation meeting on January 18 to allow as many citizens as possible to express their opinions about the planned casino.  The statements were overwhelmingly against the project, and Surrey Mayor Dianne Watts sided with public opinion in a 5-4 vote against the casino.

The Friday night meeting was an extension of the consultation earlier in the week that ran into the late hours of the night, and yet remained unsettled.  Council decided to delay their vote until a second consultation meeting could be held, in which almost 200 people had registered to speak their minds about the casino.  While the meeting attracted its fair share of supporters, most attendees were opposed to the casino and implored council to reject the casino proposal.

One woman, who lives in the neighbourhood that had been zoned for the casino investment at 10 Avenue and 168 Street, spoke about how quiet and affable her neighbourhood is and how a casino could threaten that peacefulness.

“I live where I live because I suffer from a mental illness.  It’s dark and quiet and remote, and now they are proposing to put this casino 60 feet from my bedroom.”

The opposing opinions convinced Mayor Watts that the potential economic benefits to Surrey weren’t worth the effort if the public was so adamantly against the investment.  Her swing vote broke the stalemate between pro-casino councilors and anti-casino councilors, and officially put an end to the Surrey casino proposal.

Terry McNiece led one of the groups opposing the casino, and says the credit for the final vote belongs to the people of Surrey rather than one particular protest group.

“As you can see the community is quite passionate about this.  I mean we’re stacked up against Gateway and BC Lottery Corporation but the community was behind us.”

The BCLC was lobbying Surrey to support the casino as it has publicly stated the casino wouldn’t go ahead without an endorsement from the majority of city council.  With the mayor’s vote placing the majority against the casino, the BCLC says the proposal is now dead.