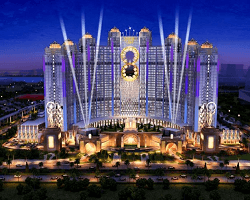 Studio City, the Macau-based casino built by Melco Crown Entertainment opened its doors last October 27, 2015 with a lavish red-carpet inaugural ceremony. Despite the continuing revenue decline in Macau, Studio City launched with much pomp and pageantry.

Lawrence Ho, the co-Chairman and co-founding partner at Melco Crown Entertainment, is optimistic that the Macau Studio City Casino Resort would contribute to the improvement of Macau’s gaming revenue. He voiced confidence in future operations stating that the ongoing projects, such as the opening of the light rail system, as well as the bridge connecting Hong Kong, would eventually bring around improvements.

After all, Studio City was developed in line with President Xi Jinping’s push for economic diversity in the territory, by integrating non-gambling elements that would attract more of the mass-market gamblers. That way, Macau’s image as a haven for VIP high rollers will eventually fade out. Accordingly, the casino tables at Studio City were set up with the mass-market gamblers in mind and not at all for the high-stakes VIP players.

Mass-market casino customers are said to generate margins at around 30 to 40 percent, which makes it imperative for operators of Macau casinos to attract more of the mass-market type of players, in order to make up for the lost revenues previously gained from high rollers.

The Studio City casino was able to secure permit to set up 200 casino tables for opening night, with 50 additional tables to come around as online casino offerings in 2016. Still, the number is 150 tables fewer than the actual number of tables applied for originally.

The Most Expensive Advertising Film Ever Produced

The Studio City opening day was marked by the presentation of “The Audition.” It is a short film created mainly for promoting the Hollywood-themed $3.2-billion Studio City resort casino complex.

Touted as the most expensive advertising material ever made, “The Audition” was directed by no less than famed award-winning director Martin Scorsese, and starring equally famous Hollywood actors Robert De Niro, Brad Pitt and Leonardo DiCaprio.  Reports have it that the film had cost as much as $70 million (AU$98 million) to produce, for which De Niro, Pitt and DiCaprio had accordingly received $13 million each.

Australian billionaire businessman James Packer, who co-owns the Melco Crown Entertainment business is apparently glad the short film is attracting much attention. He proclaims “The Audition,” as the world’s most celebrated marketing campaign material.  He voiced awareness about the changes that have transpired in media, citing YouTube videos as examples of brief content used as promotional campaigns. He added that “The Audition” is the finest 15-minute short content ever shown.

As a Hollywood-themed entertainment destination, Melco Crown Entertainment inked a deal with Warner Bros. The deal allowed the developer to build a Batman simulation ride that offers a fifteen-minute virtual tour across Gotham City. Called Batman Dark Flight, the experience offered to visitors is akin to Disneyland’s “Soarin’ Over California’ fun ride.

Another main attraction is the indoor- located, 40,000-square foot Fun Zone, offering rides to children ages 12 and below, where they can mingle with well-loved Warner Bros. characters like Tom and Jerry, Tweety and Sylvester and Justice League stalwarts.