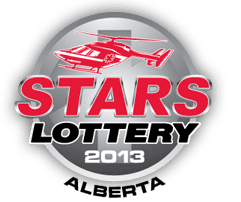 The STARS lottery is in its 20th year of operations, and the air ambulance service describes the annual event as the single largest source of funding.  STARS spokesperson Cam Heke says the annual lottery nets the organization at least $10 million in funding every year, which is crucial for the maintenance of air bases in Calgary, Edmonton, and Grand Prairie in neighbouring BC.

The lottery organizers say players can win 3,200 prizes worth over $5.6 million in this year’s event.  Players are particularly attracted to win one of four new homes across Alberta, which are located in Lethbridge, St. Albert, Red Deer, and Calgary respectively – the Calgary residence is reportedly worth over $1.2 million.  However, STARS has included a special ride in one of the service helicopters as one of the grand prizes in this year’s lottery, which Drumheller resident Josh Bhikoo – who lives near the Red Deer River valley – says he would love to win.

In 2011, Josh was flown to the Calgary Foothills Hospital by a STARS air ambulance after collapsing from pneumonia.  The ambulance was crucial to Josh’s survival as hospital staff told him after surgery that STARS got him to the hospital in 20 minutes – any longer and he wouldn’t have survived.  Josh says he has played the STARS lottery ever since, and hopes to win the ride in the air ambulance because “I want to be awake this time.”

Each lottery ticket cost players $25, but discounts were offered for people who bought in bundles.  However, all tickets have been sold out as STARS is proud to report early sellouts in every year that the lottery has been operational.