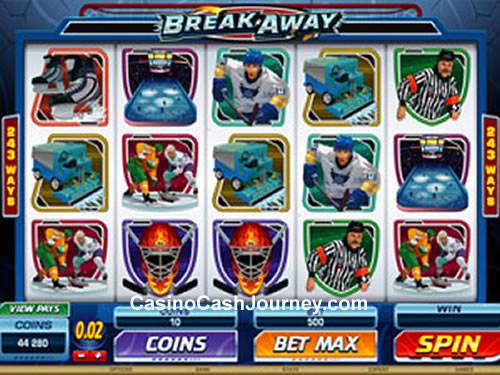 Slot fans can look forward to November as Microgaming is preparing to launch three exhilarating video slot games to the online gaming community.  The new games Break Away, Octopays, and Western Frontier are the latest in a growing list of online slot games accessible at online casinos powered by Microgaming’s software.

The Break Away video slot takes players to the ice for a grueling battle to beat the opposing hockey team.  The sights and sounds of the game are filled with graphics and animations of a real hockey game.  Players can uncover over 200 ways to win with wild symbols triggering amazing bonus features.  Hockey fans will truly appreciate the Smashing Wild feature, where two opposing players skate from opposite sides of the screen and crash into the center of the ice.  This feature is Break Away’s version of a hockey fight, which fills the reel with wild symbols and guarantees players some type of win.

Octopays video slot plays on the popular underwater theme.  The graphics take you to the bottom of the ocean floor filled with rusting anchors, half buried treasure chests, and remains of sunken ships.  The game has a special bonus feature called the ‘Kraken feature’, a name synonymous for fans of the Pirates of the Caribbean movies.  This feature triggers the grinning moray eel landing on octopus symbols which will display the octopus’ black ink defense mechanisms, but will also provide players the chance to win upwards of 16,000 coins.

The Western Frontier game takes you to the heart of the Wild West.  Riding into a town of big wagons and big chiefs, players should prepare themselves for the Cowboy and Indian themed free game bonus feature.  Players win wild symbols from one stage to increase the amount of free spins in the second stage.  At the end of this round, all winnings will be multiplied to make the game even more rewarding for players.

These new games will be released to the Casino La Vida and Red Flush casino on November 7.