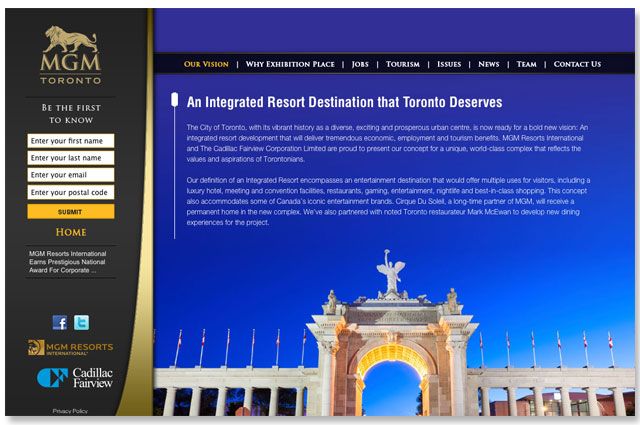 MGM and Cadillac Fairview were submitted a cease and desist order from the operators of the CNE yesterday.  The motion is part of an ongoing war of words between MGM and the CNE over the rights to Exhibition Place.  MGM is one of the leading contenders vying for operating rights of the proposed Toronto casino, and selected Exhibition Place as their preferred location.

CNE President Brian Ashton sent a letter to the Las Vegas based MGM Resorts International demanding the organization stop using images associated with Toronto’s annual exhibition in their casino proposals.  MGM posted images of the Princes’ Gates at Exhibition Place and the CNE letterhead on their website as well as in advertisements across the GTA, which the CNE argues is an infringement.  The letter describes these images as official marks of the CNE, and threatens legal action if MGM continues to lobby support for the Toronto casino by using these images.

Ashton is firmly against the casino at Exhibition Place, and says the official marks in casino advertisements mislead the Toronto public that the CNE supports the proposal.  Ashton told the press yesterday that a Toronto city councilor, whose name he did not disclose, contacted him over the weekend because the images impressed the idea that the CNE does support the casino.

“I even received a communication from a member of council who asked me over the weekend, after seeing the ads ‘Are you supporting the MGM proposal?’  That kind of reinforced my concern.”

MGM Vice President Alan Feldman responded to Ashton’s concerns by stating the casino is subject to majority consent from Toronto city council, and that MGM encourages rigorous debate from both sides of the issue.  Noticeably absent from Feldman’s response was a definitive answer on whether the CNE images would no longer be used in casino advertisements.

MGM unveiled its proposal for the casino and entertainment centre last week to members of Toronto Mayor Rob Ford’s casino sub-committee.  The designs included a casino, a hotel, and space for retail shopping centres at an estimated cost of $3 billion.  Ford is in favour of the casino, but requires a majority of his fellow councilors to support the proposal before he can send an official endorsement to the OLG – which will later select the operator of the casino.