When it comes to exciting themes and adrenaline-rushing type of games, something like super heroes is never a wrong choice. Yggdrasil have very much realised the potential and have invested great effort in making their own tribute to good-hearted vigour fighting evil forces in efforts to save the planet.

Five reels set on a futuristic skyline of what appears to be a metropolis of some sort boast 20 paylines, randomly triggered Superhero feature in the base game and even six different versions and modes of Free Spins feature, based on every single one of Super Heroes involved in this wonderfully crafted game.

Super Heroes is not your classic slot game. There are no traces of vintage Vegas-style machines in it, not even the much despised playing card symbols. Yggdrasil made sure to make their latest game quite unique in every aspect, starting from the symbols themselves.

You have eight of them in it, four super hero badges and as many ugly monsters our friends are fighting against. Graphics are impeccable and the visual appeal in general is of the highest quality. It very much resembles those high-definition cinematic video games you play on your computers and consoles, so we have no doubt that many gamers will rush to check out the Super Heroes slot.

As we have previously mentioned, there are six different Super Heroes in this game. 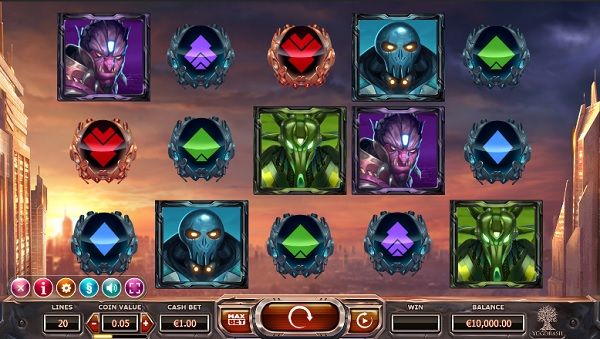 Mirage, Raven, Hopper, Tesla, Trance and Knox are here to spice things up, appearing in random combination during the base game to exercise their powers on the reel grid, replacing the low denominations, awarding wilds, adding multipliers and mystery wins to keep you excited throughout.

Same Super Heroes appear in the Free Spins bonus, activated with at least free spins symbols anywhere on the reels. All six heroes are available in four different levels, which will determine the strength of their powers and ultimately value of prizes you get.

You can hope to land additional free spins, up to 50 times your stake in mystery wins, up to 5 random wilds, 5 random symbols and up to 5x multiplier, which we will all agree is great incentive to keep you glued to your screen.

Being proper suckers for Super Heroes theme and sci-fi genre in general, it is hard to give a non-biased assessment here. There is hardly a thing we do not like here, starting from the impeccable graphics, engaging variety and multitude or rewarding features.

Still, if we had to pinpoint one negative thing about this great game, then it would be its affordability. Super Heroes slot game is available from as little as $0.20, which is great to attract beginners and casual players alike, while the top stake is set to $100, which high rollers will appreciate.

However, knowing that we all love to set the bar to the highest, some players might quickly get put off by the high price they need to invest.

This goes without saying, reaching the final verdict on a game like this seems to have never been easier. Super Heroes slot game is a wonderful new title coming from a respectable gaming developer, renowned for its high quality games.

In addition to being visually appealing, Super Heroes is quite an engaging title, bound to offer great fun and great rewards alike.