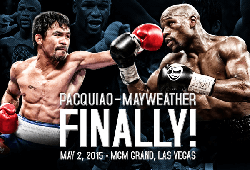 The following week after the Mayweather-Pacquiao boxing match went down in history as the Fight of the Century that never was, Pacquiao bettors and fans are now crying foul against the Philippine boxing hero. They consider his failure to disclose a serious shoulder injury sustained before, and not during the May 02 boxing match as a letdown, and a deliberate act of misrepresentation.

As a result, two (2) class action lawsuits have been filed last May 05, 2015 in the States of Nevada and California, against Manny Pacquiao, his manager and promoters. Both cases seek redress for the alleged intentional misrepresentation, and unjust enrichment at the expense of boxing fans and bettors. The plaintiffs contend that had Pacquiao declared his injury beforehand, betting and plain boxing fans could have taken the information into consideration before arriving at decisions to pay as much as $1,500, in order to watch the fight live; or to pay $99.95 as pay-per-view fees, as well as place wagers on the Filipino boxing superstar.

As consumers, they claim that the Pacquiao boxing team had defrauded them since Pacquiao and his promoters kept his injury a secret. After Floyd Mayweather, Jr. emerged as the better boxer in the much-anticipated welterweight boxing showdown, Pacquiao later claimed that a shoulder injury sustained a month before the fight, had affected his performance.

In Nevada, a $5 million lawsuit was filed by boxing fans Kami Rahbaran and Stephane Vanel in behalf of all those who placed bets, bought tickets and paid pay-per-view privileges in relation to the hyped-up Mayweather-Pacquiao Fight of the Century, which later proved to be flawed.

In the State of California, Howard Sirota, a resident of Florida also filed a multi-million dollar class action lawsuit exceeding a sum value of $5,000,000 for him and all others, including those residing in other U.S. states that have similar complaints against Pacquiao and Top Rank. The case was filed in California, being the venue where Pacquiao takes up residence, and where Top Rank maintains its principal place of business.

In both lawsuits, it is the plaintiffs’ contention that Pacquiao and his promoter Top Rank profited considerably from the May 02 boxing event. Even if Pacquiao lost the May 02 fight to Mayweather, he still stands to receive as much as forty percent (40%) of the revenue generated by the boxing match, estimated at roughly around $300 million.

The plaintiffs’ allege that the misrepresentation about Pacquiao’s health conditions was intentional. Accordingly, Pacquiao answered negatively under penalty of perjury, to a pre-fight examination question administered by the Nevada State Athletic Commission, seeking to establish beforehand if Pacquaio had any elbow, hand or shoulder injury that required examination or evaluation. Hours before the fight, the Filipino world boxer had reportedly requested to receive anti-inflammatory prescription medication called Toradol, combined with the pain-numbing Lidocaine.

The Nevada Gaming Commission blocked the administration of the injection even if the U.S. Anti-Doping Agency previously cleared the drug as non-steroidal. As Top Rank asserted, the state gambling regulator was not aware of Pacquiao’s shoulder injury at that time. Top Rank’s lawyer Dan Petrocelli calls the case frivolous and that they expect the courts to dismiss the lawsuit in due course. However, he had not commented on the misrepresentation issue regarding the State pre-examination questionnaire.